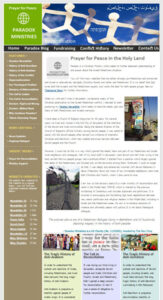 Prayer for Peace in the Holy Land: www.prayerforpeace.org.uk

Paradox is a Christian Ministry which seeks to further balanced understanding of and prayer about the Israeli-Palestinian situation.

You will find many websites that are either strongly pro-Palestinian and somewhat anti-Israel or alternatively decidedly Christian Zionist and rather anti-Palestinian. It is my belief that God loves both the Israelis and the Palestinians equally, and wants the best for both people groups. See our Theological Basis for further information.

When my wife and I lived in Jerusalem, we became weary of this Christian polarization on the Israeli-Palestinian conflict. I decided to start producing my Paradox Newsletter which seeks to take the needs, pain and fears of both Palestinians and Israelis seriously.

However, I could not do this in a way which ignored the needs, fears and pain of our Palestinian and Israeli Arab neighbours and colleagues. Half of my local staff in Jerusalem were Jewish and half Arab. Living in the land, amidst the two people groups, had a profound effect. I started from a position which largely ignored the needs of the Palestinians, and focused only on the terrorists among them. Eventually I could no longer do that. I was deeply and extensively involved with Jewish Believers in Jesus (Messianic Jews) but many of our immediate neighbours were Arab, both Christian and Muslim, whom I also came to love.

I am now on the advisory board of a wider ministry of reconciliation and relief in the Middle East, FRRME, which is chaired by the previous Archbishop of Canterbury and includes diplomats and politicians. It is involved in encouraging and facilitating high level negotiations between very senior politicians and religious leaders in the Middle East, including in Israel and the Palestinian areas. Its aim is to achieve reduction of violence and ultimately peace with justice (it is not about theological dialogue).